The arithmetic weakness or dyscalculia is the mathematical equivalent of dyslexia. A classical indication of dyscalculia is that the students cannot rely on their ability to compute accurately due to the manifest number of errors they constantly make. 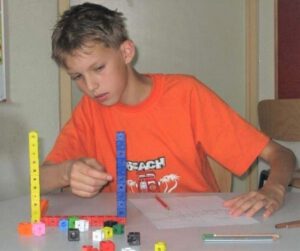 This viewpoint is backed up by research conducted by Fulvia Castelli, Daniel E. Glaser, and Brian Butterworth in their 2006 paper: ‘Discrete and Analogue Quantity Processing in the Parietal Lobe: A functional MRI study’1

According to most authorities 3 – 6% of all children and adults have developmental dyscalculia. This includes Donna M. D’Alessandro, MD Professor of Paediatrics, University of Iowa in her Blogpost on PediatricEducation.org™ “How Common is Dyscalculia?” Feb. 4th 2019 2

D’Alessandro concludes, „It is estimated in a United Kingdom study that 22% of adults have some type of mathematical difficulty that causes occupational or practical problems. Developmental Dyscalculia with its more restrictive definition has a prevalence rate of 3-6%.”

In my Kennedy-School after school tutorial program in Tuttlingen Germany, we were faced with a dilemma: The primary school children from classes 1-4 in groups of three, attained (very) good grades when we learned “by rote” with them. The children learnt and repeated the necessary steps for solving mathematical problems.

The parents were well pleased and after some months, left the Kennedy-Schule thinking this problem was solved. Unfortunately, after a few weeks they reported that that the old difficulties had returned anew. Their children were getting poor grades yet again. Please note: students visit the Kennedy-School once or twice a week for 90 minutes.

That a low level of intelligence is not the cause of dyscalculia was manifested time and again by the students who were achieving good grades in other subjects and on non-verbal IQ-tests.

To assess how prevalent dyscalculia could be, we conducted a survey over time with 87 of our students between the ages of 12 to 18 (who were not on our dyscalculia training course). Employing a simple test from 1 – 100 involving: +, -, x, ÷ and fractions such as ½ + ½, and percentages (the most difficult question was: which is bigger 73% or ¾?).

The results: 42% made more than four mistakes and 70% needed more than five minutes (average approx. nine minutes) to complete the 27 tasks, starting with 2 + 9 and ending with 49 – 17 – 9. I suggest that the average person without dyscalculia can solve these tasks in two to four minutes with perhaps one or two mistakes.

The Consequences of Dyscalculia

Time and again, year in year out, nearly all of these students (90%+) (who were not on our dyscalculia training course) passed their math exams, and often securing their Abitur which allows entry to university.

The point being the majority still could not rely on their arithmetical abilities – including ongoing doctors. As Margaret MacDougall PhD, PGCE, BSc Hon of the University of Edinburgh showed in her research paper ‘Dyscalculia, Dyslexia, and Medical Students‘ Needs for Learning and Using Statistics’ – June 2009.3

That these deficits have consequences is yet again shown through the need for first year remedial courses in mathematics at college and university due to a 30% drop out rate before the start of the second year. Only 12% of students in low-income groups finished their course within six years.4

This state of affairs poses difficulties also for prospective employers in industry who are constantly dealing with new employees who can’t add and subtract and who try to compensate by working slowly and diligently. However, time is money and an incorrectly calibrated machine can be very expensive (and dangerous).

We came to the conclusion that the majority of these struggling students could well be affected by, and suffering from, developmental dyscalculia – the root cause being the undeveloped brain area for processing amounts and numbers. This would fit in perfectly with the hypothesis of Dr Fritz Held Child psychiatrist and Neurologist – that these learning disabilities were caused by the arrested development of the specific brain area – independent of the child’s IQ.5,6

Further research by Stanislas Dehaene, cognitive scientist, Professor Collège de France, shows that the area of the brain responsible for mathematics has a number of subdivisions for: number recognition, arithmetic, algebra and possibly geometry. Our daily work reflected this, some children could recite their times tables from one to ten, others couldn’t retain them in spite of regular repetition but were able to solve algebraic problems.7

Accurate Assessment of Dyscalculia in the Kennedy‑School

We have since evolved a definitive assessment questionnaire (comprising of 10 simple questions) for each student, which we use when interviewing parents who are considering registering their child. With the appropriate instruction this reliable tool can be straightforwardly applied in any family or school.

We offer dyscalculia training course playing games with quantities. To this end we have developed a catalogue of many effective and entertaining games.

The average student on our dyscalculia course improves 2.8 grades after 12 months without looking at a math book in the Kennedy-School. Please note students visit the Kennedy-School once or twice a week for 90 minutes

As a rule, the students can rely on their arithmetical ability for the rest of their lives.

Please read the reviews of parents and experts here:

For further information please download chapter 8 ‘Five and six … are nine?’ from my book „Dyslexia, Prove Teachers and Experts Wrong!“